Share photos/videos, journals and logs for your Opae ula tank setups for others to read.
Reply
Like

#10045  by Laura USA
26 Oct 2021 11:54
It all started with a gift Ecosphere last Christmas. When I read about taking care of it, I realized the inhabitants have a hard life. So I decided to jail break them. My family members are reef aquarium hobbyists, so they were delighted to get me set up with RO water, marine salt and chaeto from their refugium. My daughter's partner built a cool rock centerpiece for the shrimp to hide in. He cycled the rock for a couple of weeks and told me it was ready to assemble.

I bought live rock, which he rinsed a few times to help me. Now I know better, but it seemed to work okay and may be why I have so many copepods.

This is the intial set up before cheato and mid cycle.

20210913_084843.jpg (519.57 KiB) Viewed 446 times
As time went on, I added the cheato. This was at one month. The ammonia to nitrite was well established, but I was still struggling with nitrites. I did several water changes and kept dosing with Prime. My family member said the nitrites were not as big of a deal with salt water, but I have no idea. If I had known the cycle was not complete, I would have waited to add snails and Opae. We all made it through to the end, and the tank has finished it's cycle. The Chaeto and algae balls have kept the nitrAte at almost 0 so far.
At one month

20210926_150758.jpg (410.31 KiB) Viewed 446 times
I was worried the shrimp would never come out and swim around, but lately they have been out and about. I have fed spirulina twice. It seems the copepods get much more excited then the shrimp. You can see them here, hanging out on hair alge on the sponge pump.

They watch me watching them, which amuses me.

watching.jpg (67.4 KiB) Viewed 446 times
They seem to be doing okay, but I do worry about them having enough to eat.

#10046  by Laura USA
26 Oct 2021 12:03
I should have added, I have 13 shrimp right now, and a 10 Malaysian Trumpet snails. The three survived the Echosphere jailbreak. The "egg" container was hard to open. The contents are under pressure and prying the glass seal sent shards flying. Once the knife created a hole in the seal, the air or gas inside hissed. It was terrible for the shrimp, who had to survive a whirling exit to new water, so must have been very shocking. As far as I know, everyone is doing fine now. I don't see all the shrimp at once. 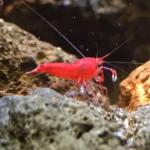 #10052  by Laura USA
28 Oct 2021 13:30
Thanks @Vorteil I have noticed the tank is growing a fine down of (hair?) algae which you can see in profile on the rocks. I have been trying to manually remove it from the tank, but it is growing quickly. Any tips on removing this algae. The shrimp seem to be as annoyed with it as I am.

#10057  by Vorteil
29 Oct 2021 16:58
Unless you do that there may be bigger issues with it down the road. Did that rock come from another established tank? You can just continue to manually remove it and keep an eye on it.

#10063  by odin
06 Nov 2021 20:32
when it comes to tank water parameters and shrimp, id only take advice from tank owners that keep shrimp. They are usually the first thing to die when tanks go wrong. If you are getting spikes in Ammonia, nitrite or nitrates then there is a big food source somewhere along the chain. Have you tested your water parameters recently?

Press HERE for a guide on how to post your own photos and YouTube videos on the forum!