The life cycle and breeding of the Opae ula shrimp.

The stages of being 'berried'

My tank setup(s) and water parameters

I decided to setup this section to share my opinions, findings and experiences for breeding the Opae ula shrimp in captivity. There is very little knowledge and information online and the sources that have had positive experiences of breeding never seem to know, say or share what their tank parameters and set-ups are or were at the time, now I don't think this is anything to do with withholding information but rather the keeper stops watching the tank in question, measuring water parameters and documenting results. This is usually where nature takes over and does its own thing making the tank a healthy breeding ground, which lets you in on the secret to breeding the Opae ula shrimp.

When it comes to successful breeding you can do everything correct and tick all of the right boxes but you are still at the mercy of the shrimp and whether they are happy and capable of reproducing. However eliminating any issues that are happening or may crop up in the future can only help and push things in a positive direction. If you are still waiting for your own tank to start reproducing and it seems to be taking forever to start don't get put off or disheartened as they WILL become berried sooner or later, it just takes a little time :) 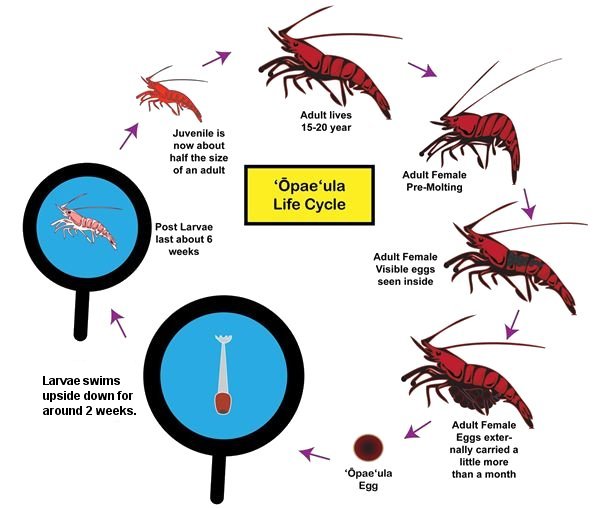 When Opae ula shrimp become 'berried' (pregnant) which is the name given when developing and carrying eggs there are a number of notable stages the shrimp and eggs go through and I have split these up into separate headings and provided information below:

All Opae ula shrimps moult several times a year which is completely normal, it will also happen when the shrimp grow and need a larger exoskeleton. When the female moults she now has a window of time to accept the males sperm to reproduce and this leads onto the mating stage which i have added to the section below. 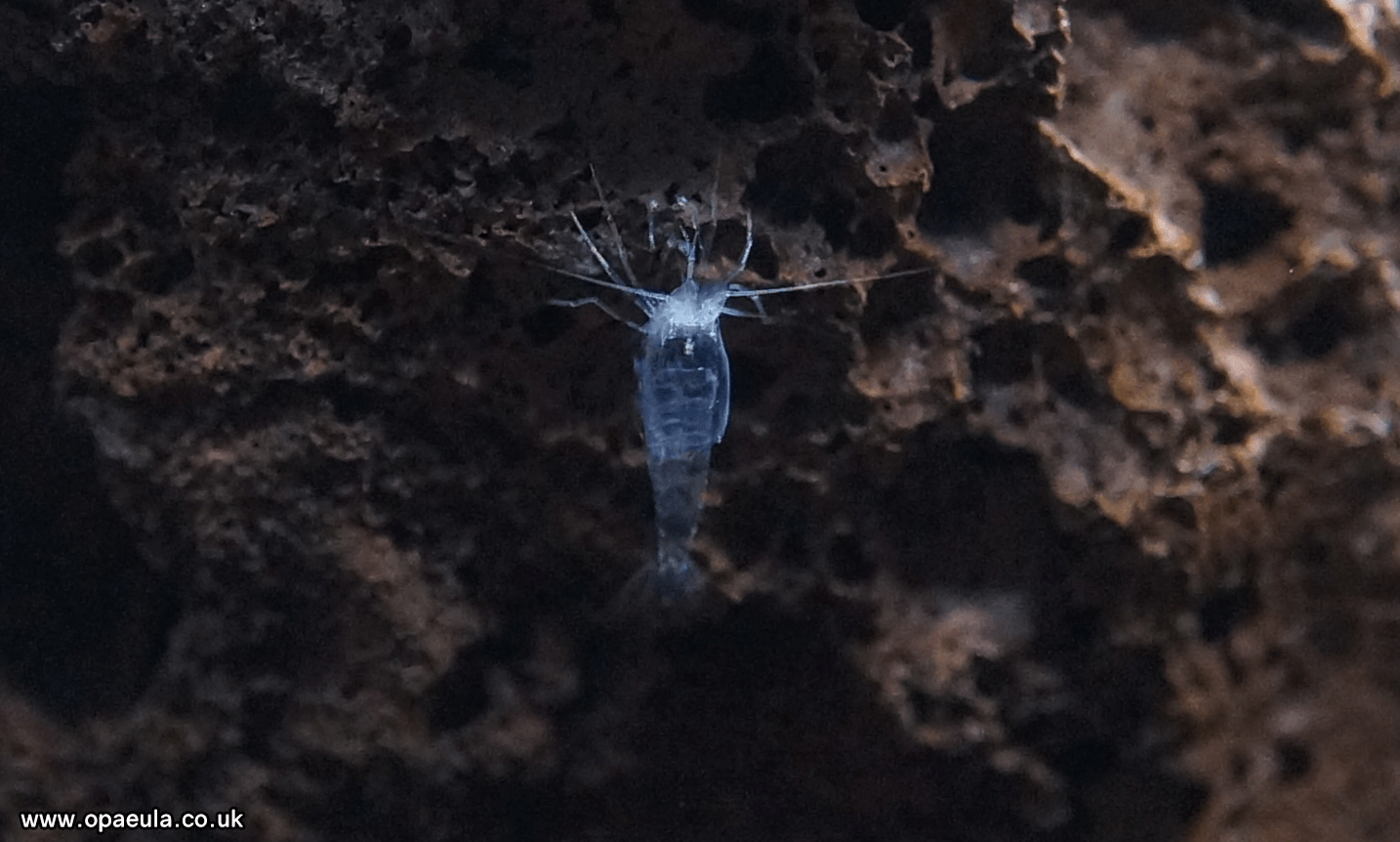 After a female Opae ula shrimp has moulted she will attract the attention of male Opae ula shrimps at an alarming rate! You will notice a group of males swarming around the tank looking for the female in question to mate with, the act pretty frantic jumping from shrimp to shrimp until they find the newly moulted female to mate with. Once the male finds her they will chase and what looks like bouncing off each other, you can see this below in the video (watch the lighter coloured shrimp and how they act).

When the Opae ula shrimp first shows signs of becoming berried you will notice that the midsection of the shrimp will become rounded and 'swollen', eggs should soon be seen being produced and making their way to the underside of her body. 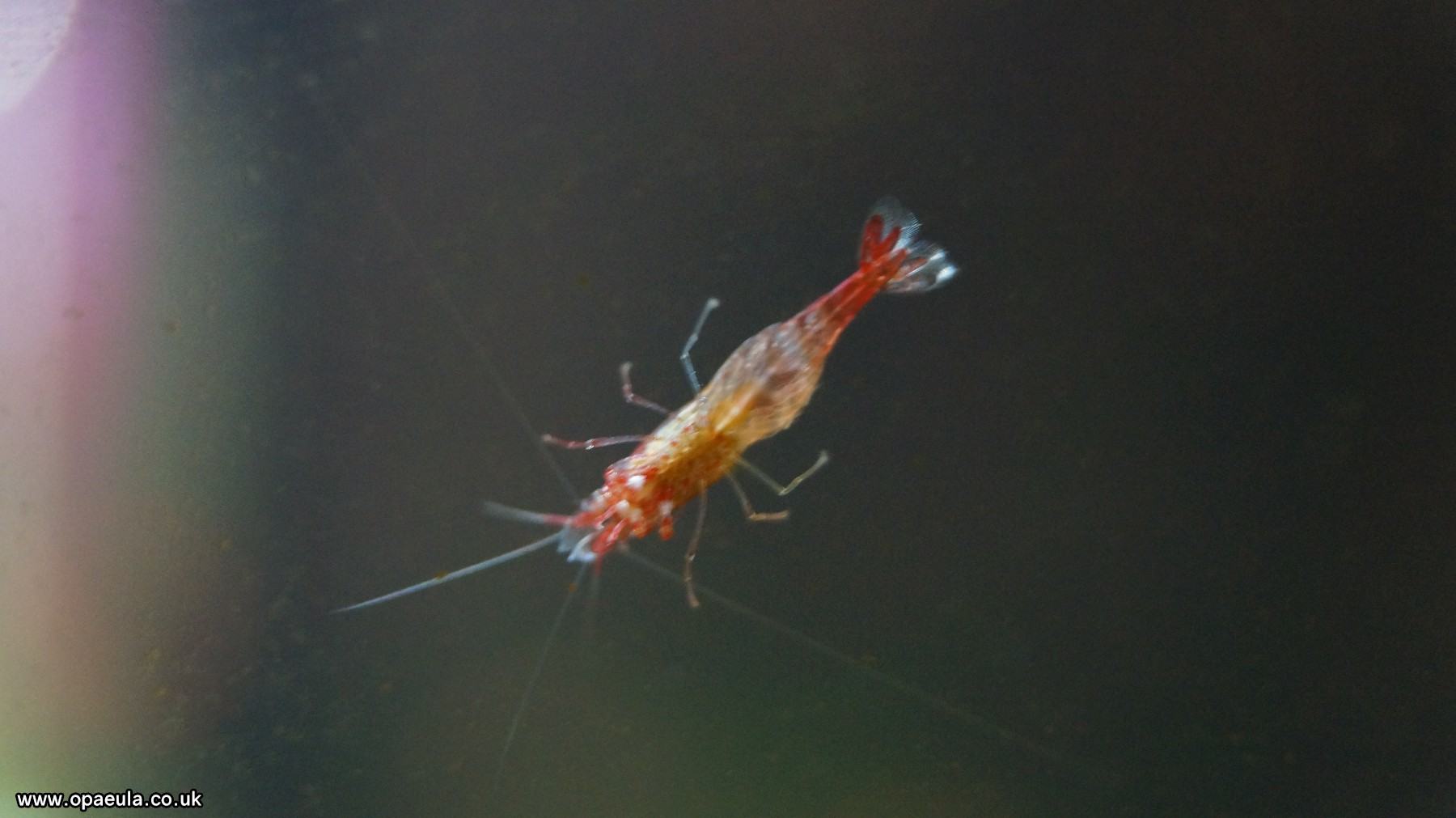 This stage is the most noticeable as the berried shrimp can clearly be seen carrying eggs underneath her body. She will keep the eggs healthy by rotating and 'fluffing' them constantly with her back legs to top them dying and degrading. This stage will last roughly 5 weeks before they get released and the quantity being carried will usually range between 1 and 20. 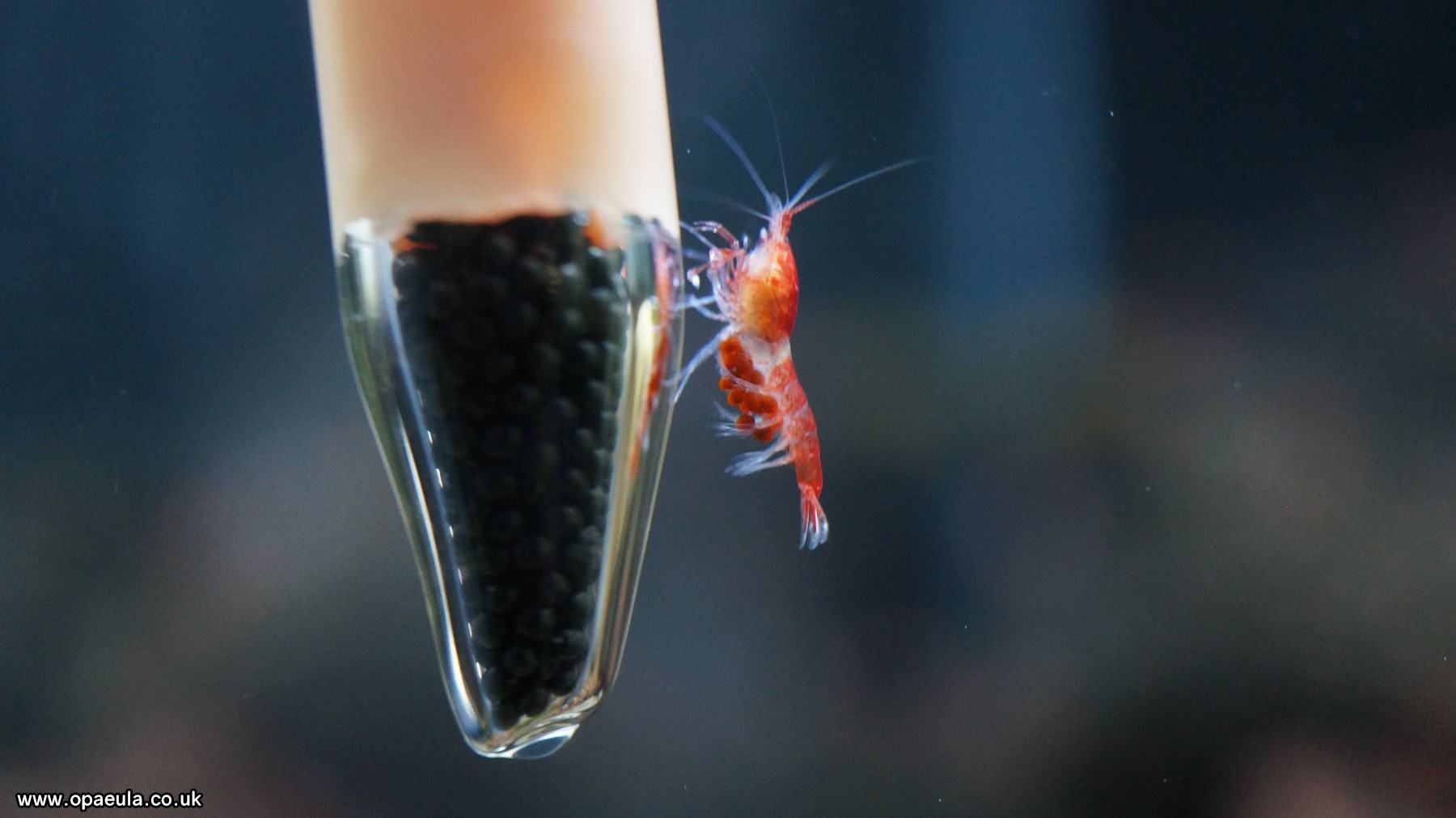 This stage is where the eggs have hatched and are still attached to the mother awaiting the right time to be released, you will see the larvae have prominent eyes and are fully larvae shaped and the mother shrimp will usually release the baby larvae over the next 2 - 3 days. 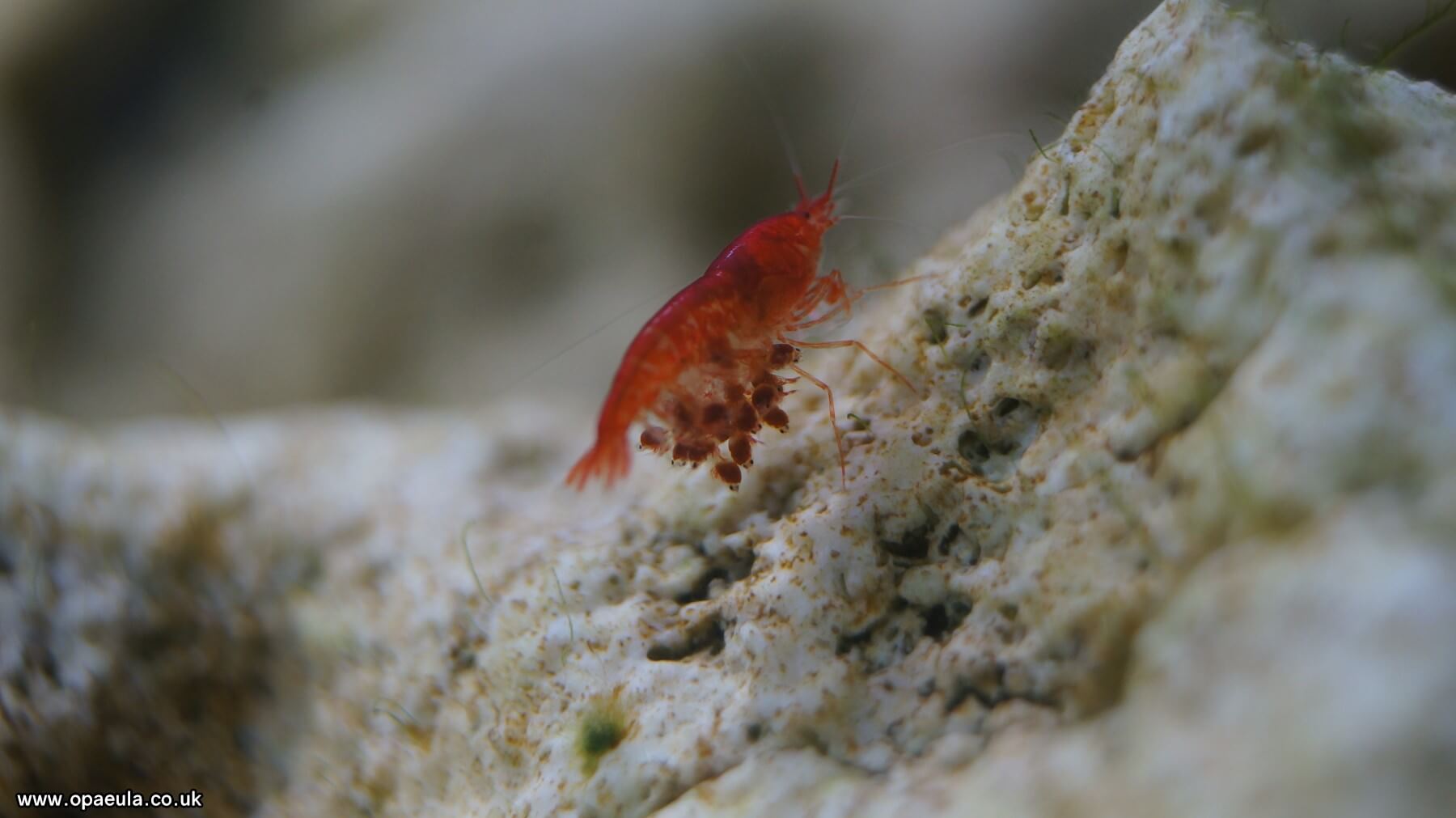 The larval stage will last roughly 2 - 3 weeks before they morph into fully shaped shrimps and during this time the larvae will feed from its yolk sac for food. They swim head down and propel themselves around the water usually close to the waters surface as they are naturally attracted to light, you will soon see this as they will linger around the area of your tank lights. 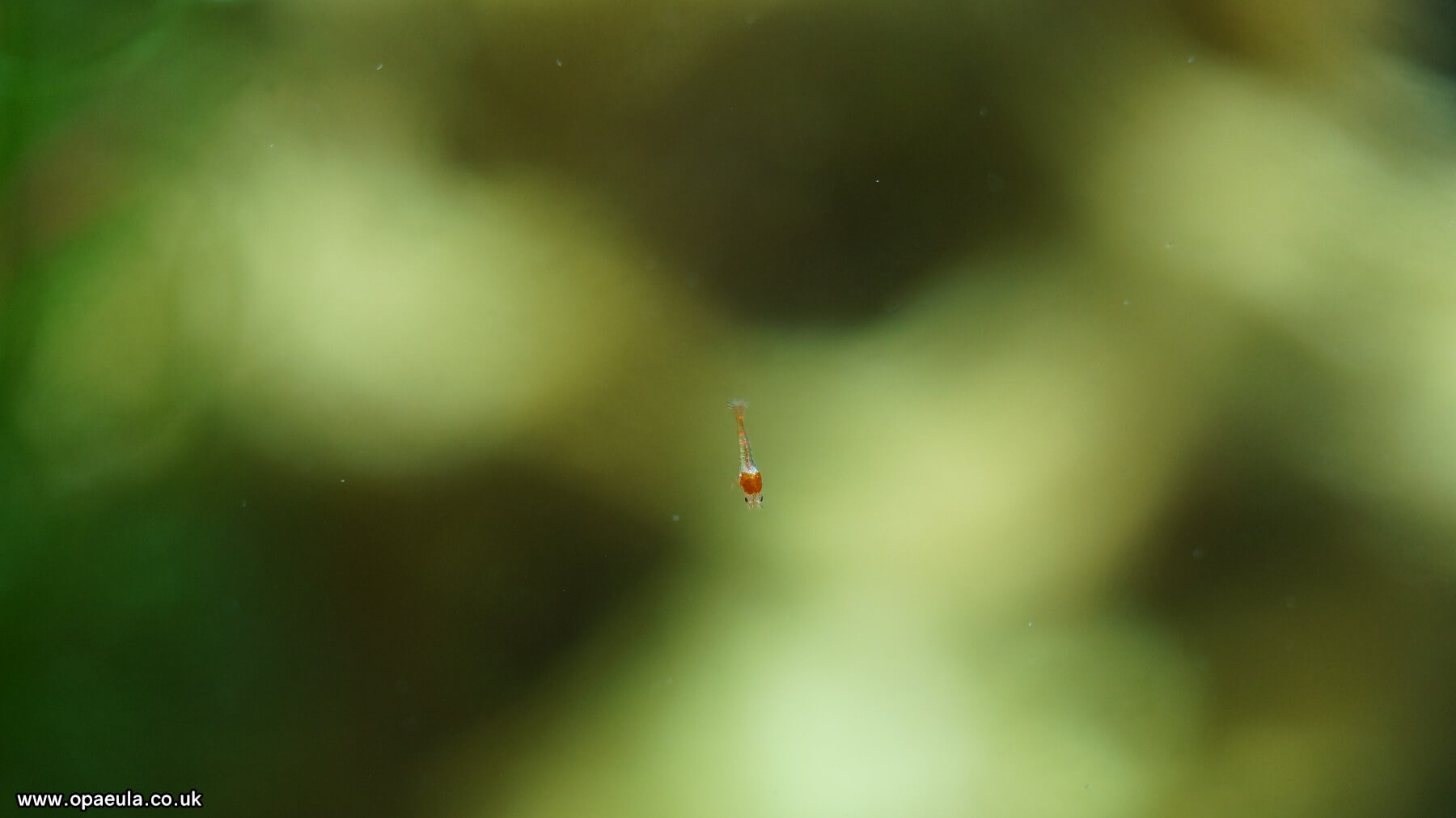 The larvae will start to develop into a fully fledged shrimp around the 2 week mark and begin to swim horizontal just like its parents, it will no longer feed from its on board yolk sac and will begin eating algae and biofilm. 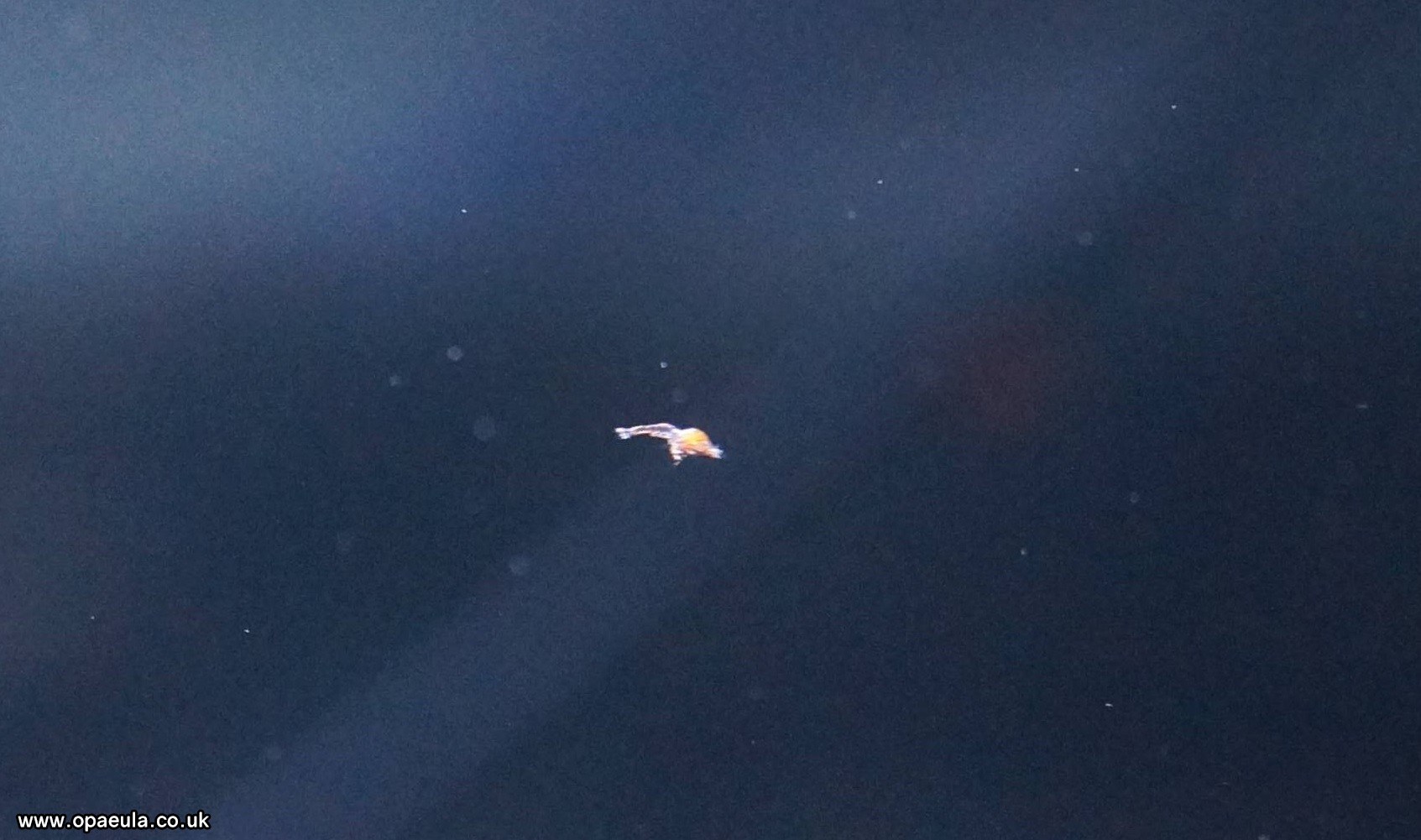 After the larvae has developed into a fully shaped shrimp it will spend the next few months eating, maturing and growing to become an adult shrimp, below you will see a baby shrimp that is a few weeks post larval stage and will continue to grow until it becomes the size of other adult Opae ula shrimps. 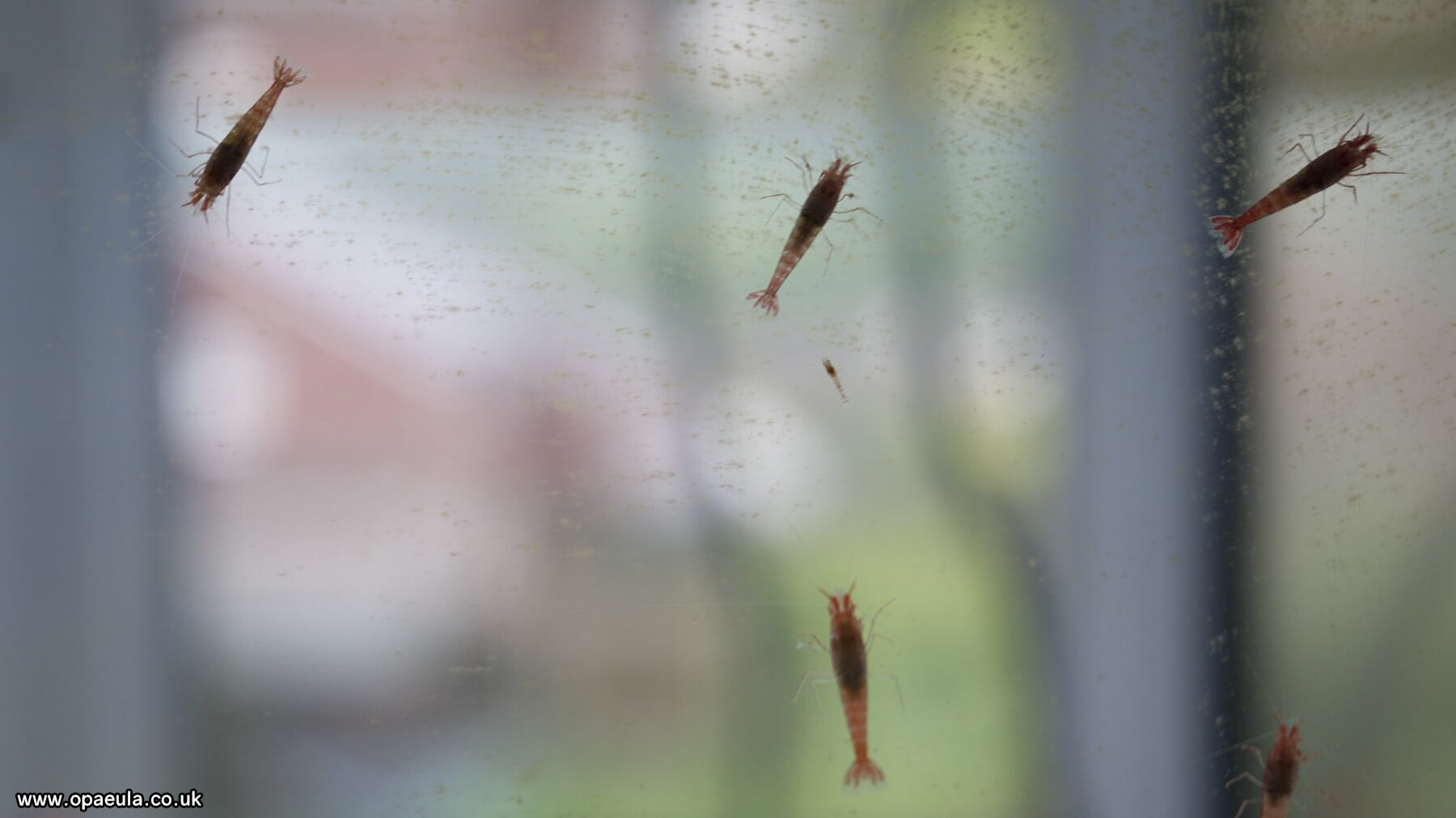 Here is a close up photo of a young Opae ula shrimp which has not long been a fully developed shrimp from the larval stages. 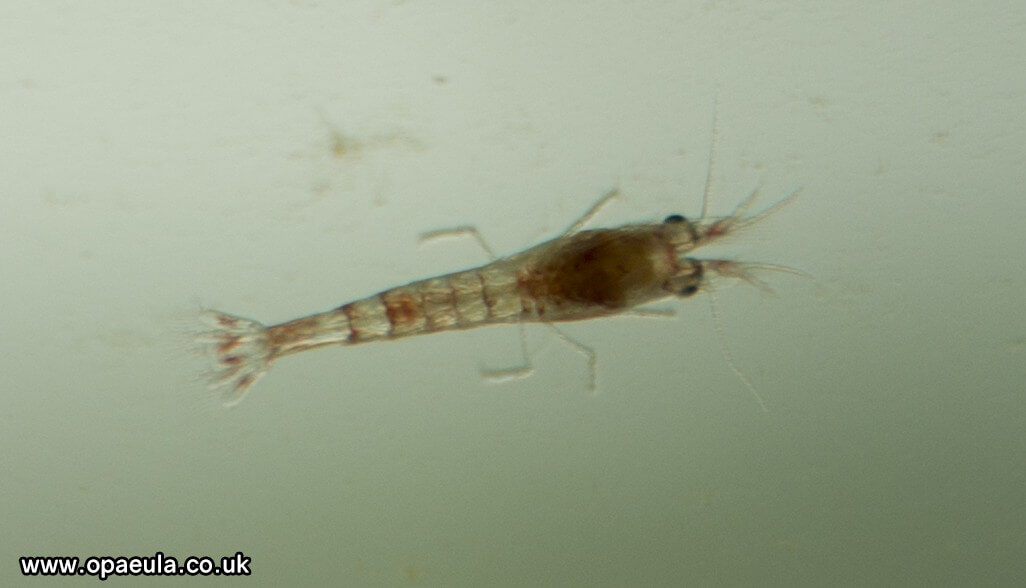 This is a fully grown adult Opae ula shrimp which is capable of reproducing and living for 20 years. 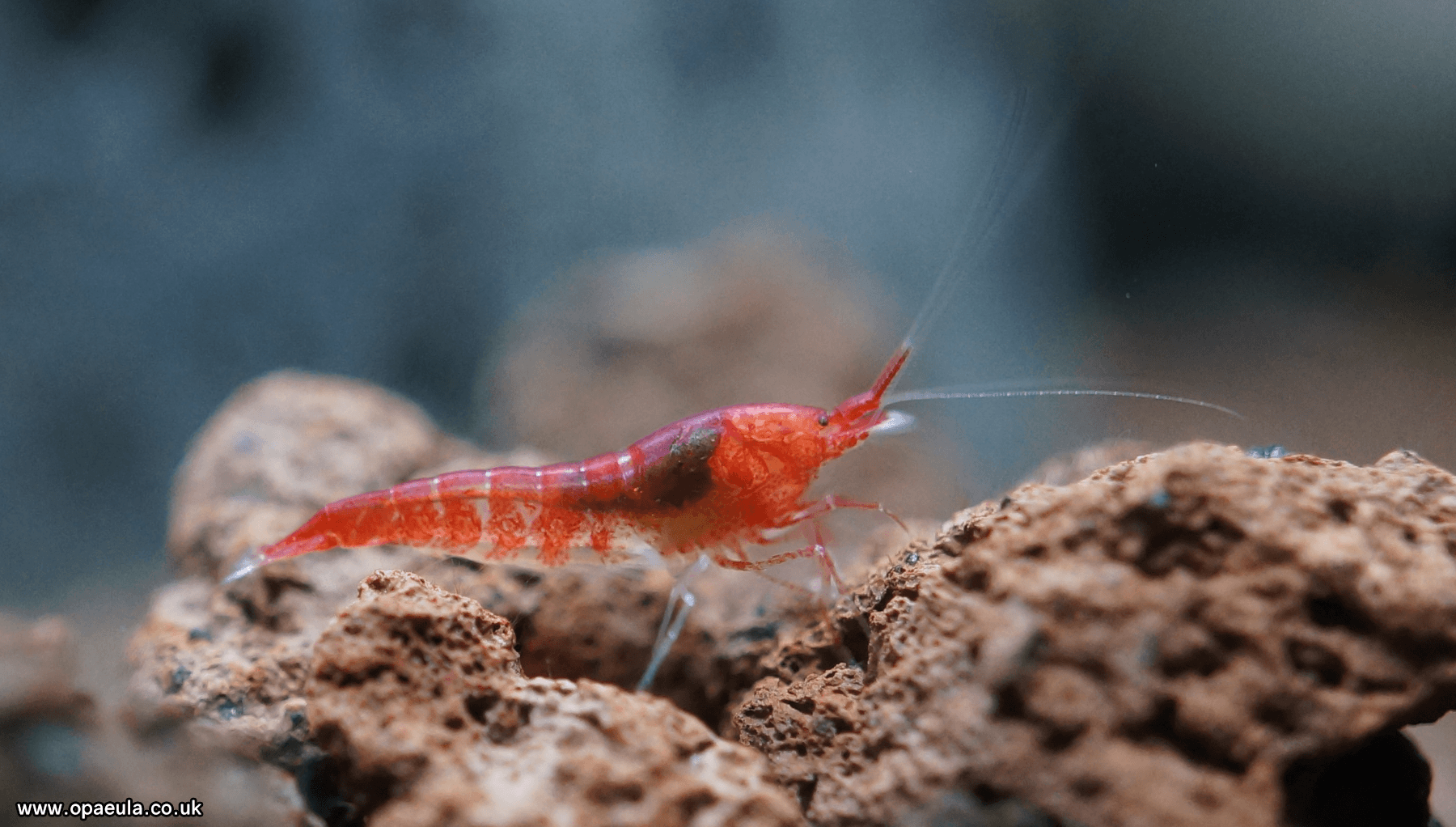 My tank setup and water parameters

I'd like to show my tank setup and water parameters so you can get a general idea of where to start or adjust your own set-up to help encourage breeding if you are struggling or feel a bit overwhelmed: 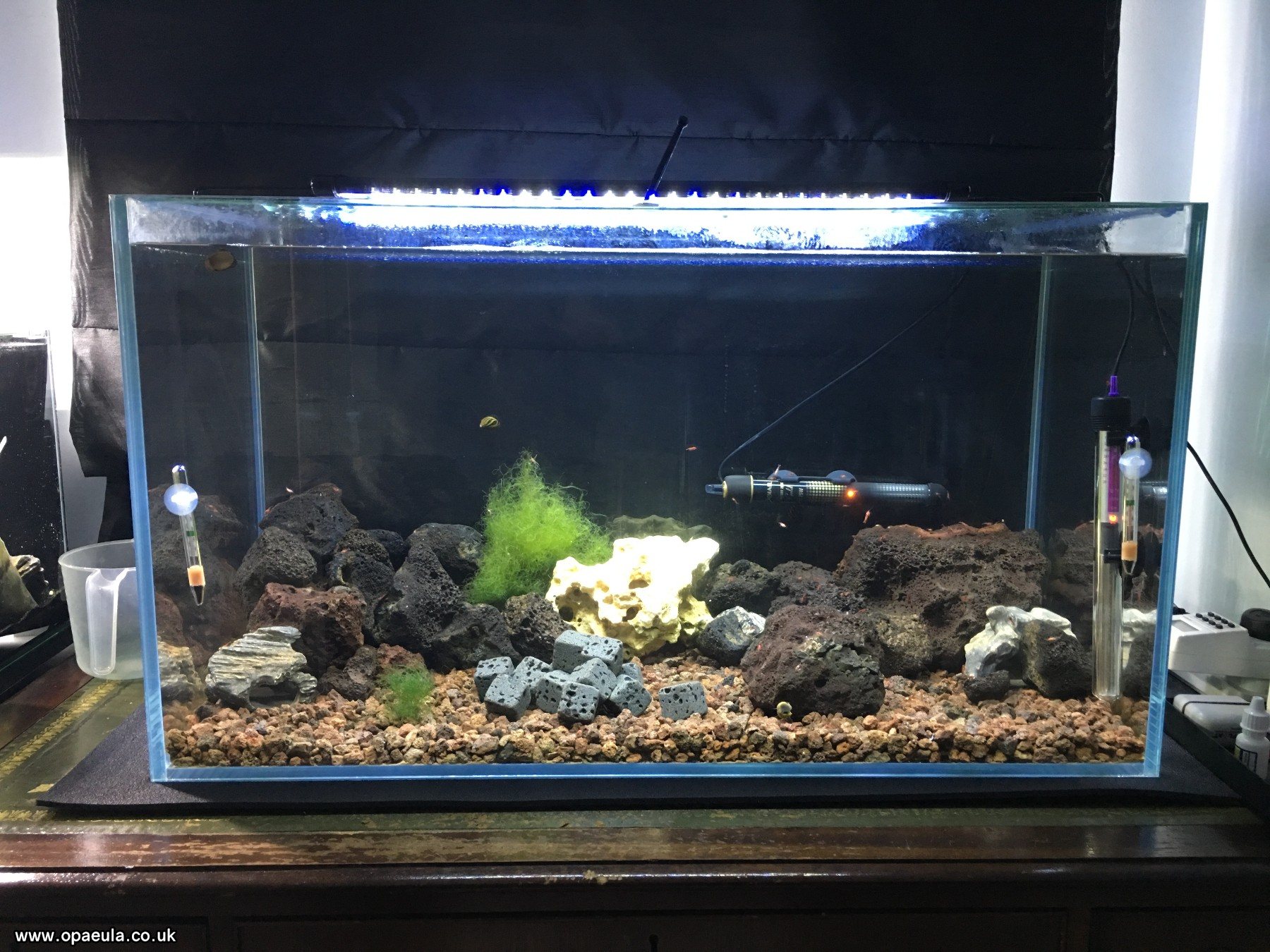 I'd have to say that although it's not guaranteed, you should get berried shrimp as long as your tank water is perfectly healthy, not over stocked and has a decent food source. The biggest issue is correcting poor tank parameters when it's needed and running into the issue of disturbing your shrimps while making corrections and changes, stress and disturbance will prevent all chances of breeding.

NEW shrimp tanks usually become stable and start to mature roughly 6 months after the shrimps initial introduction to the tank, this seems to fall in line with the length of time you have owned your shrimps and the time they usually start becoming berried for the first time. The Opae ula shrimp will usually be a month or two old (juveniles) when you buy them and will start start to breed around the 7.5 month old to one year mark, however if your shrimps are already fully grown and mature when you acquire them you may see breeding strait away so long as the tank is well matured and healthy enough for them.
- All times are UTC+01:00 -